Decentralization is an important subject of discussion in the blockchain industry and a vital part of the TRON vision. The TRON DAO is committed to providing the data for the community to understand the network better and come to its conclusions. This paper breaks down four (4) main aspects of blockchain decentralization: protocol and governance, geographical infrastructure distribution, asset allocation, and ecosystem health. We will explore how the TRON consensus mechanism operates, the amount and geographical variety of nodes that power the network, the concentration and allocation information of native assets, and finally – the amount of dApps and users. This document and the supporting data sets will change over time, and we can expect the network to become more decentralized as the ecosystem evolves and grows.

In this document, we have utilized data from various sources, including TRONScan – the TRON Blockchain Explorer, Dapp.com – Latest & Top Blockchain Dapps, CosmoScan – the Cosmo chain explorer, and tezos.fish – the Tezos explorer, among others.

Decentralization At A Glance

The simplest definition of decentralization, directly from Merriam-Webster, is:

The dispersion or distribution of functions and powers.

This definition generally refers to the decentralization of power in a government. However, it also works when referring to a person or entity’s power or control over a platform, system, or network, e.g., a blockchain.

The more decentralized a network is, the more difficult it is to gain the necessary power to manipulate/attack it. Furthermore, in a decentralized network, a few nodes going down will not stop the flow of transactions – so no matter how many users come and go – the applications should remain operational.

Not having a central authority means peers can interact directly with each other (peer-to-peer), removing the ability for censorship – by a government body or otherwise. Decentralized networks are more likely to foster the development of innovative and open-source products, services, and tools.

User ownership is one of the most exciting things blockchain technology brings to decentralized networks. It allows economics to be designed into the networks, creating the right incentives for early participants to become powerhouse evangelists and value-contributing users. Users who contribute value to a decentralized network have influence in the governance of and receive a stake in the network, which becomes more valuable as the network grows.

Depending on the size of the community and voting rules, coming to a consensus could take much longer than a centralized system, causing bottlenecks and security risks.

Depending on the consensus mechanism in play, bad actors may be able to gain control of governance mechanisms and cause negative consequences for the network.

In many cases, the cost of taking part in governance protocol votes is too high for the average user – causing a lack of participation or centralized voices.

Delegated Proof-of-Stake (DPoS) is an evolution of the PoS concept, in which users of the network vote and elect delegates to validate the next block. In a delegated proof-of-stake system, users can vote on representatives by pooling tokens in a staking pool and linking those to a particular delegate.

The system allows a more diverse group of people to participate in the process – since it’s based on earned reputation from long-term staking and not overall wealth. Delegated Proof-of-Stake consensus mechanisms allow for faster, cheaper, and more secure transactions – allowing for greater scalability.

If one, two, or even 100 nodes go down in a particular region – as a result of natural disaster, power grid failure, or government intervention – there are thousands more across the globe ready to take its place.

An ecosystem’s size and growth trajectory directly correlate with its performance. Utilizing community-maintained infrastructure allows the network to scale according to the needs of its users, spurring innovative products and services from all over the world.

Decentralized protocol governance is a key indicator for evaluating public blockchains; in this section, we will discuss the implementation of the DPoS consensus mechanism on TRON.

The TRON network relies on a Delegated-Proof-of-Stake (DPoS) consensus mechanism to manage the blockchain. Unlike a Proof-of-Stake (PoS) system, only elected nodes can approve blocks of transactions.

In the TRON ecosystem, the community elects 27 block validators to serve as “Super Representatives” (SRs) every six hours. These SRs are openly voted and chosen by the community of users staking their TRX in the blockchain system. Regardless of the size of TRX staked, each SR can only cast one vote, which effectively grants it only 3.7% of the actual voting power and keeps governance from becoming concentrated.

SR rotation is another fundamental feature of DPoS mechanisms. If one SR fails to produce blocks and distribute block rewards, another available SR Partner will fill that role. In this way, SRs take turns performing their tasks. The TRON DPoS mechanism also rewards block producers to incentivize them to validate transactions and produce blocks while distributing rewards to voters, helping maintain the blockchain network’s healthy operation and encouraging more voters to partake in network governance.

Various popular blockchains utilize a delegated proof-of-stake mechanism to power their networks because of the plethora of benefits they can provide.

Notice the difference in voting power or governance percentage based on the number of native assets staked or votes submitted on behalf of each validator. Although all three blockchains utilize DPoS mechanism, TRON’s implementation of DPoS is more decentralized as each validator has an equal say in the governing system, which is an important factor of democracy. 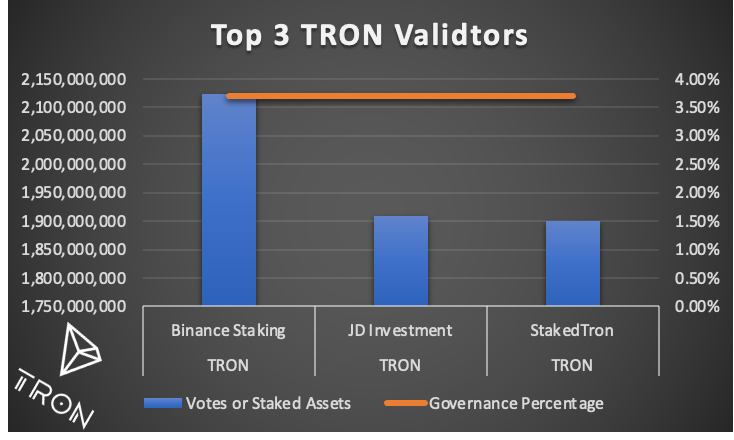 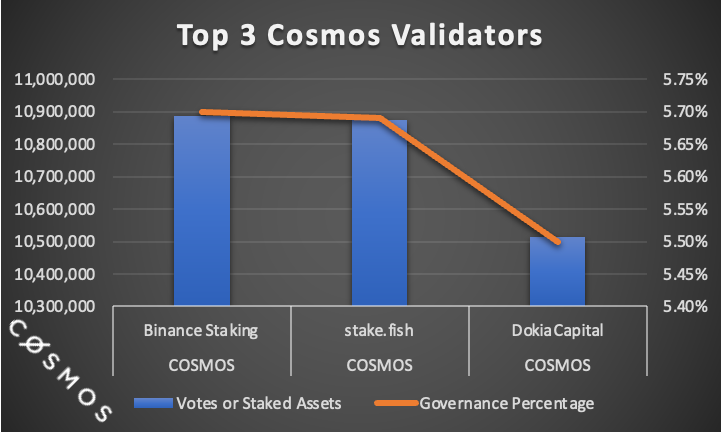 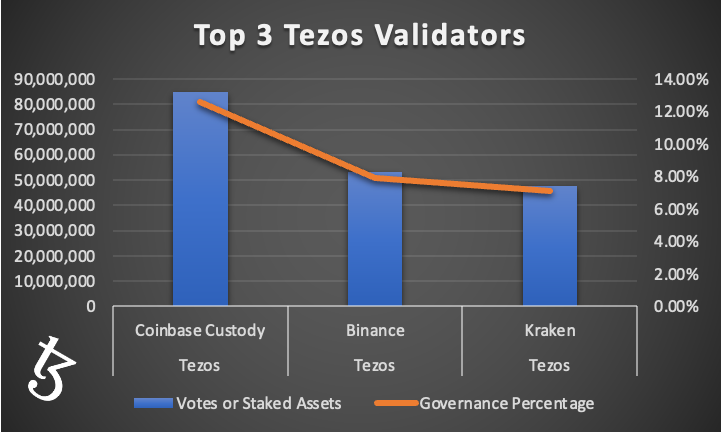 Distributed networks do not have a central server; instead, all users are granted equal access to data – delegating the burden of data processing across the network. Due to their geographical variety, distributed networks are incredibly secure and resilient. In this section, we will look closely at the current structure of distributed nodes across the TRON network.

Since historical node data can be challenging to gather, we will focus on the current architecture to assure the stability and reliability of the network. A country with high node concentration but unreliable infrastructure or a government that introduces unfriendly regulations on blockchain could negatively impact the decentralization of the network, so even though this information will change – TRON DAO continues to build relationships with governments, agencies and regulatory bodies to ensure good standing at every level, and does everything in its power to stay in compliance with all necessary regulations.

The graphical representation below shows the TRON nodes dispersed across six (6) of the seven (7) continents. The highest concentration of active nodes is currently in the United States, consisting of 1,770 out of 6,588 nodes.

The second highest concentration of nodes is in China, with 1,478 nodes, followed by Germany, Singapore, and Japan, with 604, 587, and 487 nodes, respectively. 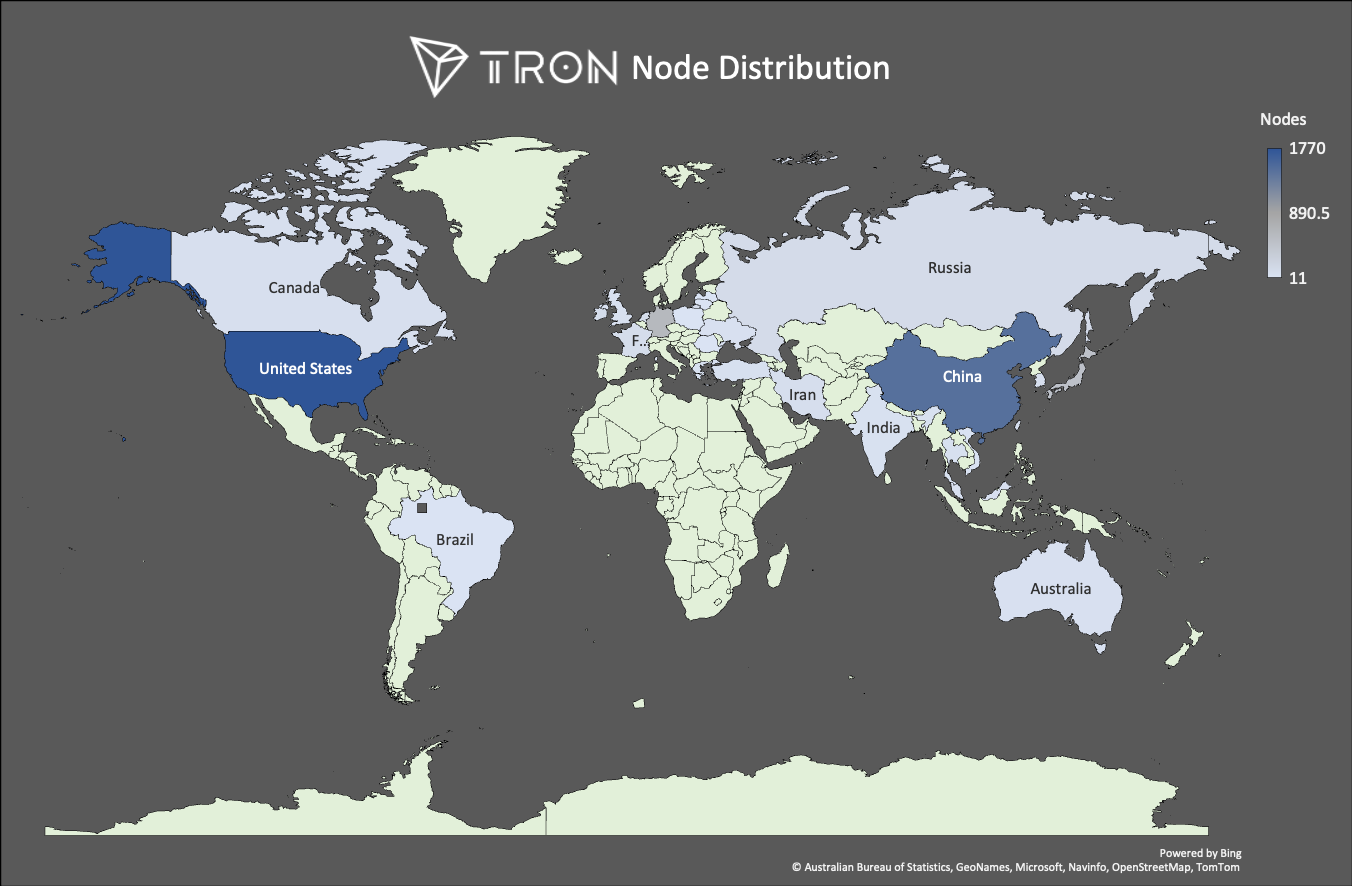 Token distribution plays a significant role in the decentralization of a blockchain. Here we look at how TRX, the native TRON token, is distributed.

Below, one can see the breakdown of TRX holders in a few different ways, Fig 1.1 shows the most straightforward breakdown – which can look a little concentrated at first, but a closer glance in Fig 1.2 shows us that the most prominent address actually belongs to an automated and permissionless smart contract, followed by a few major institutions such as Binance, Upbit, Kraken and VanEck.

In Fig 1.3, we have separated the addresses belonging to smart contracts and institutions in the top 10 and re-applied the same breakdown method as earlier. The recreated Top 10 TRX Holders chart in Fig 1.4 shows a surprisingly equal breakdown once the aforementioned data is stripped, leaving each of the following 10 wallets with an average of 966,193,068.4 TRX, or 1.05% of the total supply each.

The most concentrated allocation is in the top 5 addresses – each consisting of 1.5% or more of the total supply of TRX.

Note: all of the following addresses belong to autonomous and permissionless smart contracts and cryptocurrency exchanges.

This section looks at an essential and basic aspect of blockchains, the amount and transaction volume of applications, and the number of accounts/users.

Dapp.com reports show 4050 active dApps on TRON, with a total volume of $1.38 billion between April and July of 2022. The figures below show that the amount of active dApps is distributed across various categories, Exchange, Finance, Utilities,  Game, Social, etc.

Volume details show that the overall transactions on TRON are heavily concentrated on Exchanges, making up over $1.34 billion out of the total $1.38 billion in dApp volume over the same period. Although not significant at the moment, as the ecosystem grows and more dApps gain popularity, we should also look for more variety in dApp volume distribution. 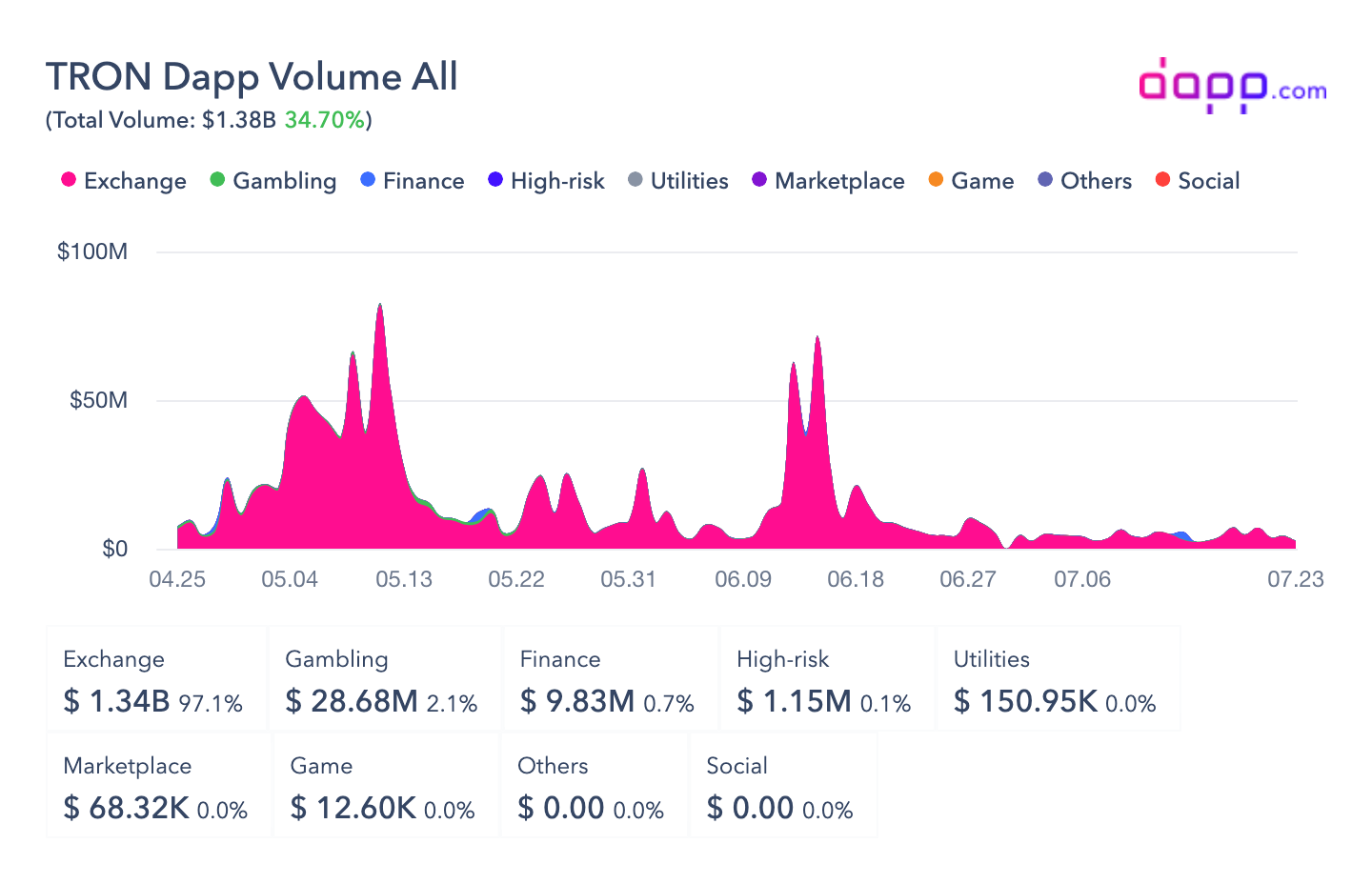 As explained earlier in this breakdown, the DPoS mechanism that powers TRON allows users to pool their tokens together and vote on their chosen delegate (Super Representative). From a security perspective, this allows any bad actors to be voted out of the SR role and trustworthy SRs in – thereby creating a constantly evolving group of validators.

We can see by the steady growth in users on TRON that the ecosystem continues to grow at a healthy pace, decentralizing the network and strengthening the voting structure by adding more voices to the mix. 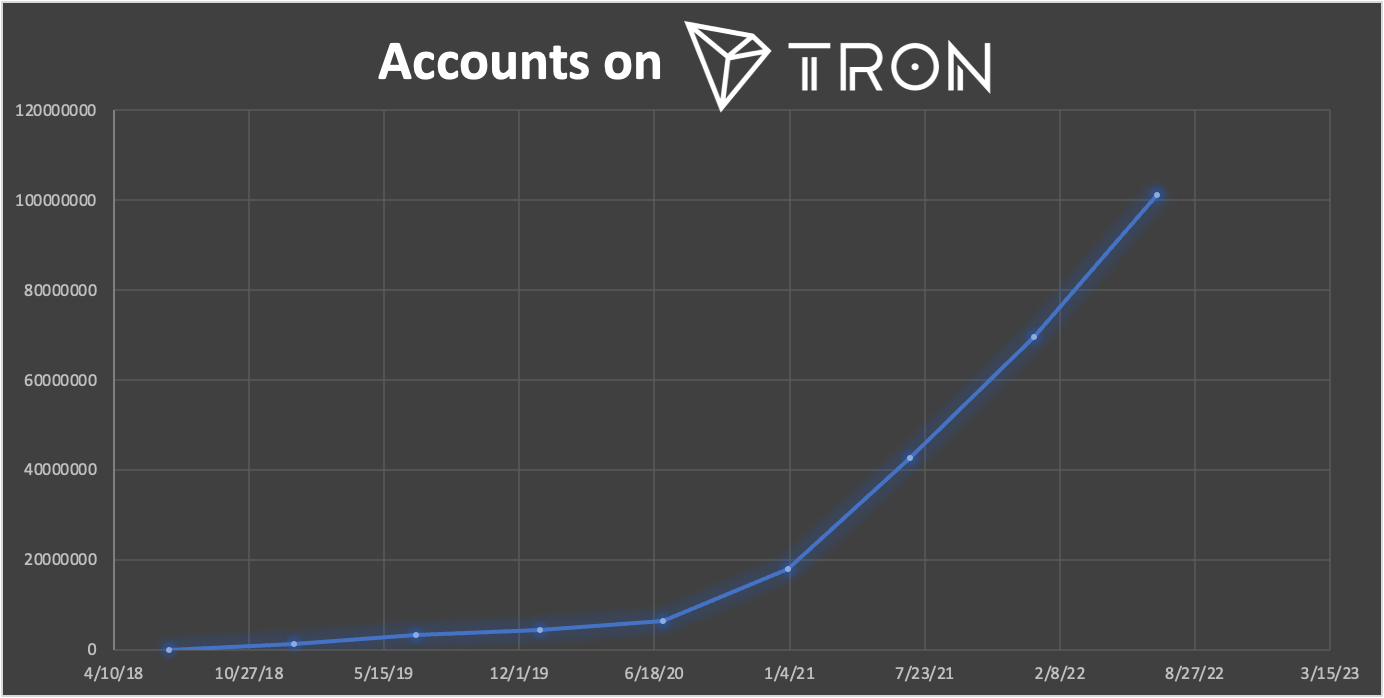 We set out to explore and define TRON’s decentralization by dissecting the available data. TRON’s underlying architecture, particularly its DPoS consensus mechanism, distribution of voting power, token distribution, dApp volume, and user growth, demonstrate that TRON has grown more decentralized over time. As more users onboard the network and actively participate in on-chain governance, we are bound to see the network continue to become more decentralized.